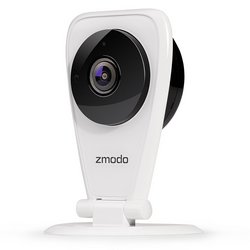 Being a smart security camera, the Zmodo EZcam is still easy to assemble and install. It can be integrated with the Alexa device, and, hence, controlled by voice. By being sold at a low price, you can buy several units to ensure enhanced protection of your home.

The camera is designed for indoor use only. Thus, it can provide protection from thieves, help you keep an eye on newborns and seniors, etc. It captures video in high resolution (720p) in MP4 format at 10 FPS – 25 FPS (the video frame can be adjusted).

This model has a two-way audio feature allowing you to communicate with whoever is in the same room with the camera. Clear voice transmission is achieved thanks to a built-in anti-noise filter. The volume level is adjustable.

The EZcam has a night vision function, being able to provide a clear image in both night and day. The visibility range is up to 26 feet in the dark. In addition, you can adjust the sensitivity of the night vision sensor according to lightning conditions (No light, Weak light, Low light).

The camera can’t be panned or tilted, so it provides only a 130° angle view. However, it has a decent 4x digital zoom with the opportunity to adjust the focus on the specific area.

The model is equipped with a smart trigger that has the ability to detect motion. Thus, as soon as the camera notices any activity, it will send a notification along with a short video clip to your smartphone. To receive such notifications, you should download a free Zmodo app that will also give you remote access to the camera’s functionality.

In the case you have several Zmodo cameras in your home, the Zmodo app will help you keep them all linked in your personal account. The connectivity protection is provided by the AES 256-bit encryption.

For cloud storage, you should subscribe to Zmodo Cloud. There is an available one-month free trial, but then you will have to pay for a subscription monthly. It delivers a 24/7 recording and allows you to customize and share the recorded footage. Unfortunately, this model doesn’t have a MicroSD card slot.

The Zmodo EZcam setup is extremely simple. Just plug it in and enter your Wi-Fi information in the Zmodo app. The camera is compatible with 2.4 GHz Wi-Fi (note that it’s incompatible with 5 GHz Wi-Fi). As you can see, the installation is a piece of cake that you probably won’t even need to resort to the Zmodo EZcam manual for that.

The camera is inbuilt in a white stand that allows it to be mounted on a wall or placed on a desktop. The model uses a 1.6mm lens. Next to it, there is a light sensor and a green LED indicator that shows connectivity. The speaker, microphone, and power ports are located on the rear.

To sum up this Zmodo EZcam review, it’s fair to say that this camera is a decent model with simple functionality that suits perfectly for basic needs. Like, for example, keeping an eye on some small space in both well-lit and poor-lit environments thanks to night vision capability. This model also can be recommended to those who don’t need a 360° view as it has a limited 130° viewing angle.

Amount of cameras in pack