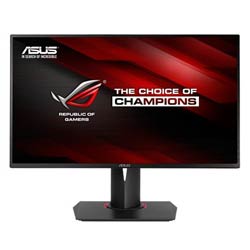 The Asus PG278Q is a gaming monitor with 2560 x 1440 WQHD clear picture quality which is a good alternative between the FHD and UHD resolutions. It offers G-Sync support and many other features you are going to need to build a decent gaming PC.

Before you begin using the monitor, make sure to download the correct driver, compatible with your version of Windows, in order to avoid further problems. All the Asus PG278Q drivers are available on the Asus official website.

The pixel reaction time is just 1ms, as predicted from a high-quality gaming display. Plus, the ULMB (Ultra Low Motion Blur) mode minimizes ghosting and blurring down to a minimum. However, it cannot be used in conjunction with G-Sync, and the image becomes darker when the ULMB mode is enabled (which may be a problem during the dark scenes). Nonetheless, for FPS games, this feature is unquestionably useful, allowing you to respond to game movements as quickly as possible.

Color representation is poor due to the monitor's 8-bit screen, and the colors seem washed out. The Asus ROG Swift PG278Q calibration settings make for a slightly improved picture, but don't expect drastic improvements. Since the monitor uses a TN panel, expect color changes when viewing the image from an angle. However, the TN panel here is slightly better than the one in the PG278Q—another model from the ROG line.

The 144Hz refresh rate is appropriate for PCs equipped with high-end gaming video cards. Even when it falls below that value, the image remains free of visible tearing thanks to the built-in G-Sync function.

The PG278Q doesn't offer Eco mode or any other energy-saving features except for standby mode. Thus, it can barely be called an eco-friendly option. It consumes 39W of power.

Although the image quality isn't perfect, the monitor's gaming features are impressive. It gets 9/10 from me.

Both the frame and the monitor's housing are matte black. There are the V-shaped vent openings on the back of the monitor that increase the airflow.

The connectivity options are quite limited. There are only 3 USB ports (one upstream) and one DisplayPort 1.2.

The LED ring around the monitor's base glows red (you can turn it off in the OSD menu). The stand can be adjusted in four ways: height, tilt, swivel, and pivot.

There are a 5-way OSD joystick and 5 control buttons to navigate through the menu. However, the minimalist symbols that denote the roles of the buttons are poorly interpreted, and I often found myself pressing the wrong button, rendering them effectively useless.

The Asus ROG PG278Q has an LED indicator in the right corner that changes its color depending on the mode:

The small number of ports is a major letdown. As a result, the design receives an 8/10.

The Asus ROG PG278Q review demonstrates that this display performs just as advertised: it has a plethora of gaming capabilities and seems to be appropriate for a variety of games. The image quality isn't the highest, despite the monitor's advanced WQHD resolution.